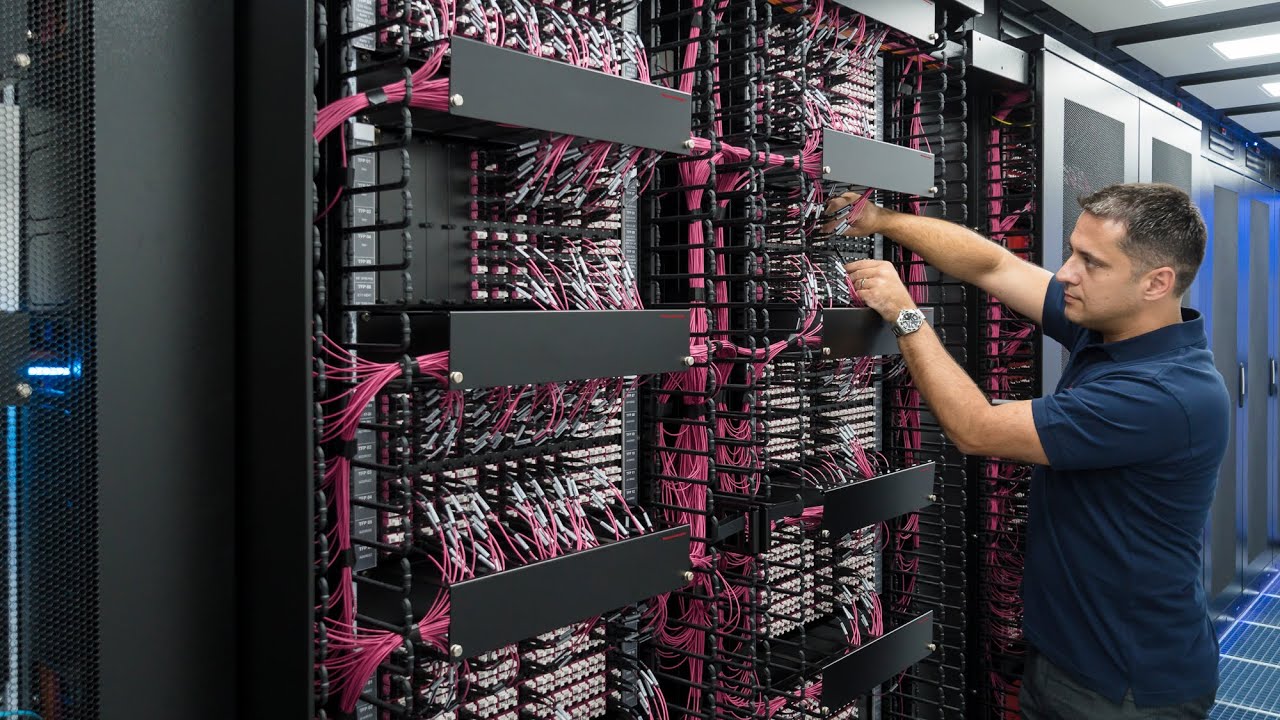 The worldwide data volume is growing rapidly. Driven by increasing digitalization, the demands placed on data centers are constantly rising. Huge amounts of data must be transferred quickly, securely and reliably. In order for all components to provide their full performance and meet the requirements, demand-oriented data cabling is essential. For data center operators, it is decisive for competition to always have their finger on the pulse, to adapt to the developments of the next few years now and to build a future-proof data center infrastructure.

“The need for speed in data centers” is the reason for the very dynamic speed evolution in recent years. As the diagram below shows, this particularly affects Ethernet

Overall, however, the introduction of ever higher speeds makes it clear that the use of parallelization technologies is becoming increasingly important. This is due to the fact that the serial “lane speed” in multimode receivers is currently max. 50 Gigabit/s, but at the same time 100, 200 or 400 Gigabit/s are required.

Multimode MTP®/MPO cabling systems based on parallel optics are a future-oriented parallelization solution that enables data centers to provide the highest data transfer rates. The desired number of 850 nm 50G-lanes is transmitted via parallel OM4/OM5 fibers. Thus, a full-duplex 400Gbit/s transmission is achieved by means of 400GBASE-SR8, using 2 x 8 OM4 fibers. For this purpose, the corresponding number of transmitters (Tx) and receivers (Rx) must be implemented in the optoelectronic transceivers. These multimode parallel optics transceivers require multi-fiber connectors on their Media Dependent Interfaces (MDI). For 400GBASE-SR8 this is the MTP® 16.

The new cabling solution from Rosenberger OSI PreCONNECT® SEDECIM is optimally designed for MTP®/MPO-based data center cabling with 16 fibers per MTP®/MPO channel. Furthermore, it is specialized for the parallel optical application 400GBASE-SR8 and can also be easily backwards migrated to 40, 100 and 200 GBASE-SR4.

Another possibility is the forward migration of the proven PreCONNECT® OCTO cabling system to 400GBASE-SR8. With the help of SR8 to 2x SR4 migration harnesses it offers the possibility of a 400GBASE-SR8 MTP®-MTP®/MPO-MPO point-to-point cabling.

The latest MSA (Multi Source Agreement) for 400G multimode transceivers is 400GBASE-SR4.2 / 400G BiDi. The optical bidirectional technology allows each individual fiber to transmit signals in both directions. This improves fiber utilization compared to the existing 400G MMF standards. The 400G BiDi specification is a quadruple version of the 100G BiDi approach with four fiber pairs that can be transmitted using standard data center cabling such as 4+4 fiber MTP®/MPO. The PreCONNECT® OCTO cabling system with its 4+4 polarity is a perfect solution here.

With multi-fibre plugs to the high-speed network

For parallel optical data transmission, the MTP®/MPO connector currently is one step ahead. This connector should be the first choice for all those who rely on parallel optics and want to remain flexible in the future when migrating higher data rates. However, the major disadvantage of the MTP®/MPO connector is its high sensitivity to dirt. As a consequence, acceptance measurements cannot be done without any difficulty without suitable MTP®/MPO tools, such as video microscopes and measuring instruments, and without the corresponding know-how.

There are various approaches to eliminate the risk factor of contamination and to make this connector system more robust against contamination. In this context Rosenberger OSI relies on the quality features PreCONNECT® PURE and PreCONNECT® LOTUS. PreCONNECT® PURE protects the front surfaces of the FO – connectors by sealed fiber optic connection interfaces on the trunk cables and thus guarantees an absolutely clean delivery and installation. The LOTUS coating, on the other hand, acts like the effect of the same name in nature: The contact points are dirt, moisture and grease-repellent and thus offer the highest possible level of cleanliness.

Another approach to minimize the risk caused by dirt is the use of multi-fiber lens connector systems. Examples include the MXC® from USCONEC or the 3M™ EBO (Expanded Beam Optical) Latch Connector. Lens technology offers the great advantage of a particle of dirt causing a significantly lower insertion loss (IL) compared to an MTP®/MPO connector system. The reason for this is obvious: With an expanded beam, the area occupied by the dirt particle is significantly smaller.

In summary, however, the following can be stated when taking an overall view of MTP®/MPO and multiple lens connector systems. Despite numerous advantages, both connector systems have a major disadvantage compared to fiber optic connector systems, such as the LC or SC connector, which are based on all-ceramic ferrules: Due to the design there is an overall higher insertion loss.

Driven by this, USCONEC’s MDC® and SENKO’s SN™ were developed based on the 1.25 mm all-ceramic ferrule of the MU and LC (figure 3). Both novel connector systems are predicted to have a bright future as they will be one of the possible MDI mating faces on the future transceiver form factors SFP-DD and QSFP-DD for speeds greater than 100G.

This website uses cookies to improve your experience while you navigate through the website. Out of these, the cookies that are categorized as necessary are stored on your browser as they are essential for the working of basic functionalities of the website. We also use third-party cookies that help us analyze and understand how you use this website. These cookies will be stored in your browser only with your consent. You also have the option to opt-out of these cookies. But opting out of some of these cookies may affect your browsing experience.
Necessary Always Enabled
Necessary cookies are absolutely essential for the website to function properly. This category only includes cookies that ensures basic functionalities and security features of the website. These cookies do not store any personal information.
Non-necessary
Any cookies that may not be particularly necessary for the website to function and is used specifically to collect user personal data via analytics, ads, other embedded contents are termed as non-necessary cookies. It is mandatory to procure user consent prior to running these cookies on your website.
SAVE & ACCEPT